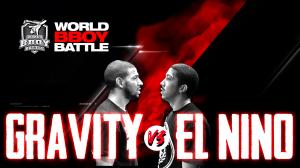 This second battle in the Bboy Sports Battle Sportscast Series continues promoting the WBB League, its players and the Bboy sport to mainstream action sports fans on social media. Since 2015, WBB has been hosting Bboy sports events primarily in New York City transforming theatre performing arts centers into Breaking sports arenas. With plans to organize championship events at major sports arenas in the US with live coverage on television and digital media, the Bboy Sports Battle Series shows why WBB is considered the major leagues of Breaking.

Featuring top-ranking Bboys from all over the world, WBB differentiates itself from every other Breaking competition through its competition format, sports announcing, judging and scoring system, all unique in competitive Breaking. WBB events are easy to understand and follow by the average person attending or watching, a major problem Breaking has had for over 45+ years until World Bboy Battle. WBB Founder Frankie “Sirswift” Hernandez is the man who developed the sport, format, judging, scoring system and sports announcing. “Our goal is to grow our league and promote the Bboy sport through events, broadcasting, social media, innovation and technology”, said Hernandez. “As a growing startup and to bring this exciting sport to the masses, our company’s next step is seed funding.”

As WBB prepares to raise seed capital, it is also preparing to launch the league’s next season which according to Hernandez is going to take the entire industry to the next level. With Breaking now an Olympic sport to debut at the 2024 Paris Games, WBB is the only pro Bboy sports league in the world and perfectly positioned to bring world-class Breaking sports events to the masses. No other Breaking organization can make this claim.

Click here to watch Bboy Sports Battle sportscasts, or sign up for our newsletter at worldbboybattle.com to get notifications on upcoming WBB events and sportscasts.

Bboy Sports Battle: An online series of sportscasts promoting the WBB Bboy sport, its league players and its league matchups in an easy to understand and follow competition format and scoring system. Sports announcers describe each event and provide a running detailed commentary of the battle as it occurs with "move-by-move", an innovative play-by-play for Bboy sports battles where announcers call out the specific names of each move being performed in a battle set.