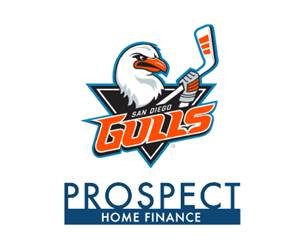 Our winning team at Prospect is excited to become the official sponsor of the Gulls. Supporting a team that has such a loyal and active fanbase, that is also local, is invaluable.”
— Jason Vondrak

SAN DIEGO, CALIFORNIA, UNITED STATES, March 8, 2021 /EINPresswire.com/ — Prospect Home Finance, a leader in the mortgage industry, is pleased to announce the official sponsorship of the San Diego Gulls for the 2021 season!

The San Diego Gulls are a professional ice hockey team in the American Hockey League. The team began playing in the 2015-2016 season, and Gulls home games during the 2021-2022 AHL season will be played at Great Park Ice & FivePoint Arena in Irvine, California. The Gulls are owned and operated by the Anaheim Ducks Hockey Club of the National Hockey League.

"Our winning team at Prospect is excited to become the official sponsor of the Gulls. Supporting a team that has such a loyal and active fanbase, that is also local, is invaluable. We look forward to cheering the Gulls on throughout the rest of the season!" stated Jason Vondrak, Prospect Home Finance Founder and CEO.

Prospect Home Finance offers a wide range of loan products available to fit homeowner's needs. Whether you're refinancing an existing home loan or financing a new home, Prospect prides itself in finding the perfect loan to fit each individual need. Our loan portfolio is always growing, allowing them to provide the most current and competitive financing options in the market today. Some of Prospect's most popular loan products include conventional financing, VA and FHA financing, along with popular cash-out loan programs. Prospect provides more choices, knowledgeable Loan Officers and a white-glove customer service experience to all of our clients. Visit https://prospecthomefinance.com/ for more information. NMLS: 365482