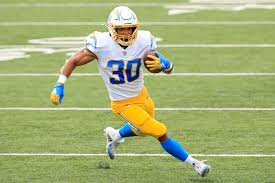 Show highlights include Ekeler teaming up with Chris Puckett for an exciting test of survival in “Vigor,” sharing his gaming passions, favorite streamers, his strategy for playing “League of Legends,” and details of his killer $10K plus gaming streaming battle station.

Show highlights include Ekeler teaming up with Chris Puckett for an exciting test of survival in “Vigor,” and sharing his gaming passions, favorite streamers

When he’s not breaking tackles and eluding NFL defenders as a star running back for the Los Angeles Chargers, Ekeler is a serious gamer, playing and streaming “League of Legends, “Fortnight,” and “Call of Duty” for his more than 22K followers on Twitch. Ekeler has even started his own gaming group called Gridiron Gaming Group, a streaming collective for major sports personalities.

Some of the topics covered in Puckett’s engaging interview with Ekeler include:

• the origins of his nickname “Pound-for-Pound,”
• what he finds more exciting – goal-line touchdown leaps or breaking tackles on long runs,
• how he kept up his legendary workout schedule during the pandemic and his recommended exercises for staying fit during quarantine,
• how he balances his busy football, streaming, and gaming schedule and what he loves about streaming,
• his memories of playing “Call of Duty” with his younger brother growing up and how they taped cardboard to their TV to create a split-screen, multi-
player effect,
• who are his favorite gaming streamers and esports teams,
• his strategy for playing “League of Legends,”
• and details of his killer $10K plus gaming streaming battle station.

Ekeler also revealed what it was like playing with former teammate quarterback Philip Rivers and what he likes about the Chargers’ new young quarterback phenom Justin Herbert, would he consider becoming a full-time streamer and content creator after his NFL career is over, what to expect at his upcoming June 4 Gridiron Gaming Group charity fundraiser featuring top athletes showing off their gaming skills, and what has inspired and influenced his charity work through his Austin Ekeler Foundation.

In an exciting gameplay show finale, Ekeler and Puckett team up to test their survival skills in the game, “Vigor.” Don’t miss all the gaming fun and Ekeler’s and Puckett’s informative game reviews.

You can watch the entire show, which aired on February 23, here:
(https://youtu.be/hxjFbhGzsqQ ).

Ekeler also recently participated in Fortnite Streamer Bowl II during the Super Bowl, with his team the Loud Ones, including top Twitch streamer Alixxa, finishing 16th in the tournament out of 30 teams.

On the football field, 5-foot-8, 200-pound Ekeler’s nonstop work ethic paid off at the beginning of the 2019 NFL season for the Chargers as he quickly made a name for himself with impressive runs and game-changing plays. In the best season of his career so far, Ekeler rushed for 557 yards on 132 carries (4.2 YPC), snagged 92 passes for 993 yards, and scored 11 touchdowns. His 2019 performance as a starter earned him a multi-year contract extension with the Chargers.

However, Ekeler struggled with injuries during the 2020 season, his fourth in the league. He sat out weeks 5 through 11 due to a Grade 2 hamstring strain and a hyperextended knee. In a late-season game against the Kansas City Chiefs, he suffered a season-ending concussion when took a hit to the helmet near the end of the first half. Despite playing 10 games this season, Ekeler still averaged 4.6 YPC and gained 530 yards on the ground, hauled in 54 catches for 403 yards, and scored three touchdowns.

Ekeler played in college for Western Colorado University, and despite the school’s small size and low profile, he beat the odds by making the Chargers roster in 2017 as an undrafted rookie.

“As a first of its kind, The Gamer Hour celebrates the convergence of traditional sports, music, comedy, and acting with esports and gaming. If you enjoy hearing about celebrities that have grown up with gaming, and who lead interesting busy lives, The Gamer Hour is a must-see and share show,” said Mark Thimmig, chairman, CEO of Esportz Network.

The Gamer Hour, which is filmed at the iconic New York City Times Square Reuters studio and produced by Reuters Broadcast Solutions and Esportz Network, is available globally on Fite.TV, (https://www.fite.tv/vl/p/esportz-network/), and more than 50 media distribution platforms.

The Gamer Hour, airing on Tuesdays at 6 p.m. PT., features interviews with celebrities from traditional sports, musicians, comedians, and movie stars that enjoy gaming. This show was designed to meet the ever-increasing demand for high-quality, fun, and compelling video-on-demand esports and gaming programming.

Fans can view the show and follow upcoming guests and showtimes on The Gamer Hour website and through social media.

Those interested in becoming a show sponsor for The Gamer Hour, appearing as a show guest, or investing please reach out to Esportz Network at info@esportznetwork.com.

Esportz Entertainment Corp. is located at the epicenter of esports, surrounded by hundreds of the greatest names in game development, arenas, tournament play, and those who drive the global esports industry. Esportz Entertainment Corp. through its Esportz Network, (https://www.esportznetwork.com), one of the largest global esports news organizations with over 90 reporters, photographers, videographers around the world, and a Reuters global partner for esports, is covering esports leagues, teams, athletes, along with the people and the companies behind the sport in a manner that matches the excitement and rapid global growth of esports.