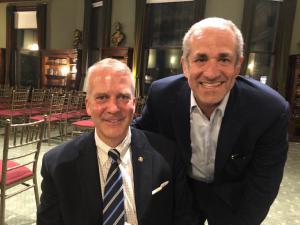 NEW YORK CITY, NY, UNITED STATES, December 2, 2020 /EINPresswire.com/ — Israel's nickname is the Land of the Bible. Travelers know its the No. 1 place in the world to visit if you want to admire ancient sites referenced in the Bible and New Testament. Avid traveler Stephen Odzer has close family in Israel and he has traveled there countless times. He recently discussed his favorite Biblical sites across the country.

"The No. 1 site I always suggest first-time visitors of Israel to see is Mount Tabor," Stephen Odzer said. "This is known as the site where Jesus, in the Bible, underwent transfiguration. It's also an incredible spot to admire Lower Galilee from the 575-meter-tall peak."

Stephen Odzer added that Mount Tabor is an iconically historic site, known as the place where Israelites stormed down the mountain to defeat the Canaanites commanded by General Sisera. He explained that in addition to being a legendary Biblical site, Mount Tabor is a must-visit destination for people of all religions.

"Visitors absolutely can not miss Mount of Olives," Stephen Odzer added. "This site is important to Christian and Jewish traditions, as it was a Jewish burial ground for more than 3,000 years. The mountain is also considered sacred in the Bible and mentioned countless times in the New Testament. It's the exact place where Jesus stood as he cried for Jerusalem."

Mount of Olives is at the east end of Jerusalem's Old City along a two-mile-long ridge with three summits. Stephen Odzer described that more than 150,000 graves can be seen here, as well tombs of the prophets Malachi, Zachariah, and more. The spot can be a somber place to visit but the views are breathtaking and the olive trees are some of the oldest in the world.

Stephen Odzer added that one of his other favorite religious and generally jaw-dropping destinations is the Sea of Galilee. No trip to Israel is complete without standing on the shores of this lake. This is the place where many of Jesus' ministries took place, and four of his apostles were recruited from these exact shores. Amazingly, the Mount of Beatitudes, which stands overlooking the lake, is where the iconic Sermon of the Mount was given.

"The Sea of Galilee is the place where Jesus' walk on water took place, and that alone makes it worthy to pay a visit," Stephen Odzer said. "This is one of the most legendary Biblical locations in all of Israel."

Stephen Odzer finished by adding that travelers who have time to visit more Biblical sites should not count out the Jordan River, Mount Sodom, and the Valley of Elah. He explained that it's best to take an extended trip to Israel, because the list of legendary historical and Biblical sites is practically never-ending.