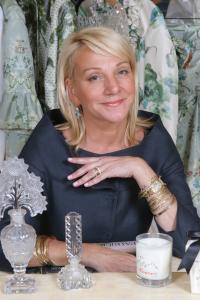 Lee Anderson Couture was featured on NYC’s society show “City Matters” with Judith Graham, on how retail is surviving during the COVID-19 crisis

NEW YORK, NEW YORK, USA, November 24, 2020 /EINPresswire.com/ — Lee Anderson of Lee Anderson Couture was featured on NYC’s society show “City Matters” with Judith Graham, on how Upper East New York retail is surviving during the COVID-19 crisis. Lee shared concerns about how her 40 year "made to measure" couture business will ride the storm, however, was confident that New York will get through the retail crisis. Lee expressed her heartfelt gratitude to her clients, and is touched by their loyalty to the brand. As all retail businesses, LEE ANDERSON COUTURE is focusing on servicing their clients by offering their exclusive designs through their online store, and making sure that the customers in store experience is safe.

Lee Anderson is an American designer, native of Northern California. Lee moved to New York City and attended the Traphagen School of Design in 1973. After Graduating she was introduced to Seventh Avenue by Ralph Lauren (1975), then part of the Kreisler group.  She began working for John Kloss a legendary creative (1975). From 1975 to 1978, Lee worked as an assistant designer and occasionally freelancing for the Ralph Lauren active wear press kits (1977) before moving to Kasper by Joan Leslie as an assistant designer (1979).

Lee Anderson designs for women who refuse to wear " label conscious" clothing that is available in each city they travel to. In 1980 Lee Anderson left Seventh Avenue behind, to establish the label in a townhouse off Madison Avenue. Her clientele includes international royalty, high profiled individuals and celebrities.

Lee Anderson is known for her fabrics, chromatic luxury, graphic details and overlays. The fitters mold garments from the collection to fit precisely and reflect the personalities of the client.
Barneys, first discovered her (1981), and then competitor Bergdorf Goodman (1989) Saks (1991), Bloomingdales (1991) and fine specialty stores followed. Lee Anderson was honored with the "Design Excellence" award, by the New York Horticultural Society (2012).