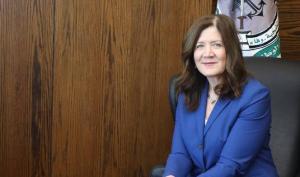 US Ambassador to Lebanon, Dorothy Shea

WASHINGTON, DC, USA, June 29, 2020 /EINPresswire.com/ — The World Council for the Cedars Revolution (WCCR) joined with the US State Department to condemn the actions of Judge Muhammad Mazieh who has apparently “ordered” all Lebanese media to refrain from publishing US Ambassador Dorothy Shea’s comments for one year after she criticized Hezbollah’s current stranglehold on Lebanon.

Said Ambassador Shea: "It [Hezbollah] has siphoned off billions of dollars that should have gone into government coffers so that the government can provide basic services to its people," she said. "It has obstructed some of the economic reforms the Lebanese economy so desperately needs."

“Ambassador Shea is absolutely right,” said WCCR Secretary General, Tom Harb. “Hezbollah’s tentacles reach into every arm of the Lebanese government and financial institutions. Their use of a mixture of bribery and intimidation is masterful and long-standing. Very few Lebanese have the courage to stand against them individually, but the silent majority wants an end to the corruption of their institutions. Hezbollah is slowing destroying Lebanon.”

“The United States government cannot oppose this terrorist organization everywhere in the world, while quietly allowing it to flourish in Lebanon,” added WCCR National Director, John Hajjar. “It’s ironic that this judge accused our Ambassador of interfering in Lebanese internal affairs, while Hezbollah was founded by Iran, is massively financed by Iran and directed at every turn by Iran. How is that not interference in Lebanese internal affairs?”

Hossein Khorram, AMCD Vice Chair, states: "Judge Muhammad Mazieh, or better said, his Tehran masters, wish to take what little free press is left in Lebanon with this political stunt. Now civil and criminal penalties can be brought against those few brave journalist when threat and intimidation has failed against them. An independent judiciary is essential for any democratic society and I find it a mockery of justice for a sovereign nation's judiciary to protect interest of another nation before their own."

“Hezbollah needs to be disarmed as per UNSCR 1559,” continued Mr. Harb.”Otherwise, the Lebanese people will continue paying the price for their country’s instability.”

WCCR maintains that Hezbollah has corrupted every aspect of Lebanese life. We applaud Ambassador Shea for her courage in speaking out against this evil terrorist organization. Calling it a political party does not change its Iranian-born terrorist stripes. If the Lebanese are to taste freedom once more, Hezbollah must be completely purged from the government and civil society. We stand with Ambassador Shea and the Silent Majority in Lebanon.