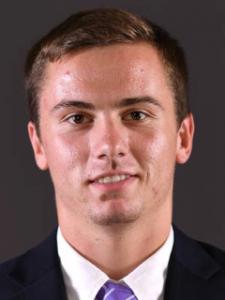 Will Powers Student at the College of Holy Cross

WORCESTER, MA, UNITED STATES, November 28, 2019 /EINPresswire.com/ — Will Powers is an honors student who played basketball at Holy Cross on the Crusaders basketball team in the NCAA patriot league. The official name of this prestigious higher education and learning center is The College of the Holy Cross, located in Worcester, MA.

During Powers' first two years of his academic life at Holy Cross, he has remained an honor roll student. Now in his senior year at Will has launched his website http://www.willpowersco.com to showcase the Swarthmore, PA native's experience, recommendations, and talents to potential recruiters within the financial services industry. Powers, while being an exceptional student-athlete, attended all team activities while maintaining academic honor roll status.

Will Powers website went live on August 1, 2019, and since then, there have been over 14,380 impressions on the site. The Swarthmore, PA native has found that the average user spends over 2 minutes reviewing Wills' skills, education, and accomplishments.

Other Holy Cross basketball players, current student-athletes, playing NCAA college basketball with Powers were Jacob Grandison, Jack Stevens, Caleb Green, Karl Charles, Jehyve Floyd, all who all saw time playing at the Hart Center which is the is the main athletic center at the College of the Holy Cross in Worcester, Massachusetts in the United States.

Although a committed athlete to the Holy Cross basketball program and Holy Cross Athletics, Will knew there was more to life than sports. Powers has never dreamed of being a professional player like so many others that wanted to play for an NBA team. He wanted something different. He wanted to use the excellent education and resources provided to him by Holy Cross.

Powers started gaining experience over the past two summers through internships. First, working for a private equity firm, GMH Ventures, Will was able to reconfirm his passion for the financial services industry. He was explicitly trained in deal sourcing and evaluations, valuation, due diligence, LBO financing, growth equity financing, LOI and Purchase Agreement, and the 100-day plan.

Will continued honing his career path the following summer working for the money manager, Stifel. Working alongside the SVP of Investments, Will was introduced to the world of both private wealth management and institutional asset management. Helping both sides with current and prospective clients, Will was exposed to the importance of client relationships within the industry.

The idea behind the website was to make it easier for company executives and recruiters to access information about Will Powers as an individual and to get a better feeling of what he is all about. Powers is looking to establish himself within the financial services industry, and he is looking for opportunities where he can showcase his drive and leadership.

Will Powers has started his final year at Holy Cross, and he is dedicating this senior year to bettering an already excellent academic career while beginning his search for a professional career in the financial services industry.
Today Powers is a member of a school investment club where he is influential in managing over $100,000.

A graduate of the Malvern Preparatory School, Will Powers had an astounding career both athletically (scoring over 1000 pts. with many rebs) and academically while traversing the halls of his alma mater.

As an athlete, Powers was a standout as the captain of the men's basketball team at his high school while setting numerous records, including joining the few in the "1000-point club." Many of Will Powers' athletic student teammates (AST) worked to achieve this honor, but relatively few could actually obtain the prestigious high school athletic accomplishment.

During his academic career at Malvern Prep, the Holy Cross student was a member of the National Honor Society and President of Adelphia Society, a mentorship and "big-brother" program that helped new freshmen with the transition to high school.

Powers participated in the Stock Market Games while a student at Malvern Prep impressively placing 2nd in a 10-week long competition where students competed to create the most value of equity through the stock market.
Additionally, Will was a contributing member of a nationally ranked powerhouse lacrosse team that went on to win championships.

Powers understands that sports have helped round him out as a person and taught him the value of teamwork.
While he values the decision-making skills that he has honed as an athlete, he finds the ability to bring these skills to the real world more valuable.

If you are interested in learning more about Will Powers, please check out his website located at http://www.willpowersco.com.