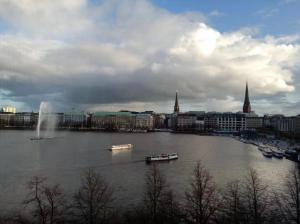 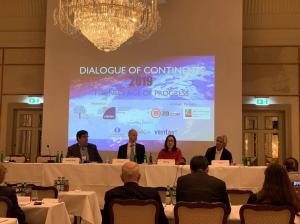 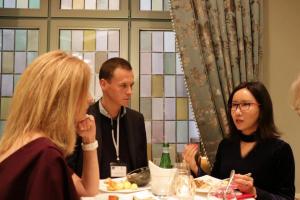 AMERICA, November 7, 2019 /EINPresswire.com/ — From October 29th to October 30th, the two-day Dialogue of the Continents 2019 was held. As a strategic partner of this year’s event, ZB Group was led the Chinese delegation under vice president Aurora Wong.

The Dialogue of Continents is a forum hosted by the Hamburg Institute of International Economics and the Reinventing Bretton Woods Committee. The gathering engages top public and private sector actors in an in-depth debate. This year’s two-day dialogue marked the 25th anniversary of the organizing commission.

Scholars from universities and research institutions are also well represented with the likes of respected academics from Oxford University including the professor of Globalization and Development, the Director of Technology and Economic Change at Oxford University (Martin Project), as well as the Associate Dean of the School of International Studies at Renmin University of China, and Dongsheng DI from International Economics.

The inclusion of cryptocurrencies and assets in the conference’s focus on digital economy indicates that blockchain and DLT technology is moving closer to worldwide integration. Aurora Wong spoke on this topic during the afternoon keynote of Day 2. She displayed the value of her experience working in the World Bank, Merrill Lynch, and Boston Consulting Group and tied that to her analysis of the cryptocurrency space. Since founding Crypto Capital in 2016, Aurora formally transferred from traditional finance to encryption industry. She believes that blockchain and digital economy must hold a major place in the future.

The following is Aurora Wong’s thoughts on ZB Grou’s European Crypto Tour that kicks off with the Hamburg summit but continues on through Malta:

ZB group had the honor to be the strategic co-organizer of the intercontinental dialogue conference in Hamburg. Excited to participate, we organized a team to attend the conference representing a Chinese delegation, including the founder of the Metaverse , Eric Gu, the CEO of Chain Board, Zhu Qing, and the three founders of the Ant Node Alliance. Zeng hao, Zhang Jingwei and Yang Zhiwen.

Just before departure for Hamburg, President Xi Jinping issued the high directive embracing blockchain technology and industrial innovation. Truly this gave us a lot of encouragement and confidence. This trip to Europe is not only an opportunity to learn about European advanced regulatory systems and project development experience, but also a stage to showcase the strength of China’s blockchain ecosystem.

I was honored to share opening remarks for the second day's agenda. I think we should have a prediction that some new financial institutions may emerge in the future digital financial era. In terms of blockchain, it has quickly become a matter of national strategy. What brings the most value to enterprises is not blockchain technology, but a new business model based on blockchain technology and there’s no doubt it will bring great changes to the financial market.

Take the attitudes of China and the United States as an example. On the surface, they are very different. The United States has not released Libra at the regulatory level, while China has officially supported the development of blockchain from the national will. In fact, they are the same way, that is, cryptocurrency has at least the potential of subversion, and should be guided and developed.

However, the social system in China and the United States is different from the business environment, which leads to a different route. We are better at concentrating on doing big things, and the US tends to promote technology and business development with the power of market competition. So they not only have Libra, but also there are many digital dollars that have been circulating in USDT and TUSD, and China’s central bank digital currency is definitely leading global R&D progress.
Speaking of the future of the currency central bank and the emergence of the digital currency, the President of Saga Foundation Ido SADEH MAN and the CEO of Fnality International Rhomaios RAM said that they agree with the idea of China’s development of the central bank’s digital currency, that is, the central bank’s digital currency is not currently It will impact and replace the existing monetary system, and still maintain the two-tier operating system of the central bank and commercial banks, mainly used to replace the M0 currency circulating in the society, which will help the central bank to strengthen the traceability of currency circulation without causing potential negative impact.

Deputy Managing Director IMF Vice President Zhang Tao has been working to reduce international economic and trade frictions.Since 2018, the trade war between the two super-economies of China and the United States has had a negative impact on the global economy. When the technological trends such as the blockchain and the digital economy come, China’s thinking is undoubtedly correct, that is, the blockchain is not only It is a digital currency. It has been used for the issuance and circulation of tax receipts in China, and has already established a foreign trade financial platform, which greatly reduces costs and improves efficiency.

In the process of communication, everyone will slowly realize that such an occasion is very necessary. The guests in the traditional financial field have a vague understanding of the capabilities and boundaries of the digital currency. They may be more easily regarded as floods and beasts. They will stand still under the psychological effect of fear and awe. Many of you here are still vested interests in the financial system. Whether the encryption industry is incorporated into regulation or actively embraced in the future, it is necessary to fully understand the cryptocurrency and digital economy.
The Hamburg Intercontinental Conference is the first stop for this European encryption journey. We will also travel to Berlin, Switzerland and Malta, where Switzerland has the world-famous encrypted Zug. During Malta, the Malta Digital Innovation Authority will organize global labor. The Intelligent Blockchain Summit is expected to exceed 20,000 people. The following weeks will see us busy tackling the big questions and looking for the right partners.

Wha’ts more, Aurora and the ZB Group team will also be attending Singapore’s Fintech Week (Nov 10-16) kicking the week off as a diamond partner for CoinMarketCap’s annual gathering, The Capital.