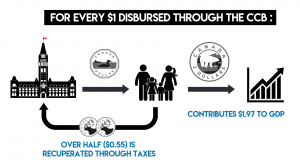 TORONTO, ONTARIO, CANADA, September 19, 2019 /EINPresswire.com/ — A new report, published today by the Canadian Centre for Economic Analysis (CANCEA), finds that the Canadian economy substantially benefited thanks to the economic activity generated by the Canada Child Benefit (CCB). Since its introduction in 2016, the revamped child benefit has functioned as a major stimulus for Canada, contributing an average $46 billion a year to GDP – more than the economic output of any of the Atlantic provinces.The analysis further found that in the past three years the program has contributed the equivalent of 453,000 full-time jobs per year and supported $26 billion in wages. In a climate of broader economic uncertainty, this report notes that the economic activity generated by the CCB was almost twice that of the payments themselves, with every dollar disbursed through the program contributing $2 to GDP. This economic stimulus also contributed to tax revenue, offsetting more than half the total payments made to families through the program, which saw federal and provincial governments receive a combined $0.55 in tax revenue for every $1 provided to Canadian families.

The report, organized by UBI Works, sought to examine the economic contributions of cash transfers to low- and middle-income families. As one of the largest such programs in Canada, the Canada Child Benefit was designed to significantly reduce the rates of child poverty and provide much needed assistance to low- and middle-income families. In doing so it established a basic income for Canadians with children, providing 1.1 million families with more than $600 each month. Since its introduction, the CCB has provided cash payments to the families of over 6.4 million children and kept 588,000 young Canadians from failing under the poverty line. In addition to its transformative impacts on these families, the analysis demonstrates that the program had a broad-based contribution to the entire Canadian economy.

As many Canadian families struggle to cope with the changes brought on by increased global competition, systematic automation and the rise of precarious gig-work, this report demonstrates the potential for basic income programs to provide increased opportunity and security to Canadians while bolstering the economy. With $2 in economic activity stemming from every dollar paid to families and over half the cost returned to governments in tax revenue, the CCB highlights the economic advantages of a basic income model. As the challenges faced by working Canadians continue to intensify, programs like the Canada Child Benefit offer a clear vision of how a basic income can empower the hardest-hit and support the economy for all.

To view the report in full, please visit ubiworks.ca

About CANCEA and UBI Works
The Canadian Centre for Economic Analysis is a socio-economic research and data firm. CANCEA provides objective, independent and strictly evidence-based analysis dedicated to a comprehensive, collaborative, and quantitative understanding of the short- and long-term risks and returns behind market changes, policy decisions and economic outcomes. Throughout its history CANCEA’s policy analysis has served a wide range of Canadian government and not-for-profit organizations.

UBI Works is a not-for-profit initiative which aims to share the evidence that basic incomes are good for the economy. By collecting and facilitating research, this diverse group of business leaders, politicians, economists, artists and advocates aims to inform Canadians about the empirical realities of basic incomes. In partnering with academics, grass roots organizations and leading advocates, UBI Works designs and spreads narratives which challenge Canadians to envision and build a more prosperous future.