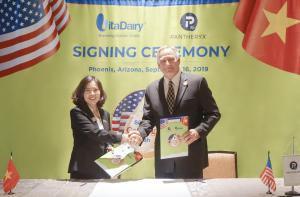 The Exclusive Signing Ceremony between VitaDairy and Pantheryx on providing Colostrum named ColosIgG 24h for VitaDairy in Vietnam; which happened in the presence of Governor of Arizona State, doctors, nutrition experts in the U.S, and many major media channels have confirmed that VitaDairy company is THE FIRST PARTER of the LARGEST American Colostrum group and also be THE ONLY Vietnamese dairy company which is provided ColosIgG 24h. The Signing Ceremony took place on September, 16th, 2019 in Arizona according to local time.

This event marked a turning point for both Vietnam and The U.S in Colostrum industry.

The Governor of Arizona said he was looking forward to witnessing this great Signing Ceremony because it has a profound humanity not only for Vietnamese children, but also children around the world.

Also within the Signing Ceremony, representatives of Pantheryx shared: Pantheryx experts had opportunities to join many seminars which organized by VitaDairy. We appreciated the colostrum scientific applications for Vietnamese immune nutrition industry. It is an action that is above all the kindness from VitaDairy too all Vietnamese people, especially Vietnamese children.

Why do VitaDairy use ColosIgG 24h instead of 48h or 72h colostrum. Ms. Nguyen Thi Ha, CEO of VitaDairy, shared:” The good products have to be made from good Ingredients. With “Enriching Human Vitality” spirit, we spent a lot of time researching and analyzing, then we finally believe that Colostrum in 24h is the best one, so we decided only use ColosIgG 24h for our nutrition products, which can bring the best immune nutrition in the world to Vietnamese people, especially Vietnamese children.