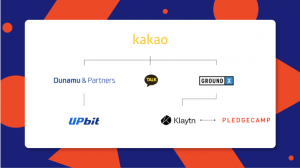 Developed by Kakao’s blockchain subsidiary arm Ground X, Klaytn aims to combine the best features of both public and private blockchains, and provide a world-class user experience to millions of people. Recently, Kakao has raised US$90 million in a private coin offering in order to fund development and research activities in Ground X.

Ground X’s CEO Jason Han wants to onboard 10 million user accounts onto Klaytn within its first year. To this effect, Klatyn plans to leverage the massive user base of Kakao’s free mobile texting and calling app KakaoTalk. Installed on over 93% of all smartphones in South Korea, Kakao Talk is the country’s most popular messaging app.

In Dec, 2018, Upbit became the world’s first crypto exchange to receive certifications from the Korea Internet&Security Agency and the International Organization for Standardization, for information security, cloud security and cloud privacy. Recently, they have expanded their operations to Singapore and Indonesia too.

Kakao and its subsidiaries

In order to popularize blockchain technology among the masses, Ground X plans to fill Klatyn with a range of applications, including games, shopping apps, travel apps, and so on. In the words of Jason Han, they are partnering with “promising blockchain projects developed by globally successful service providers with a prospective user base of tens of millions”.

The partnerships will mutually benefit all the ISPs, as each of them would potentially be able to access each other’s’ user bases and drive further penetration.

Pledgecamp is proud to associate itself with Klatyn’s ecosystem as one of their initial service partners. Ground X has been selecting only quality companies with proven track records as their partners, and we are pleased to have passed their strict and rigorous listing criteria.

The partnership will enable millions of Kakao users to access our crowdsourcing platform, and invest in projects of their choice without being worried about being scammed in the process. Klaytn’s other ISPs will also be able to directly utilize our platform in case they wish to raise funds for a new product or service.

Pledgecamp is a company which is trying to disrupt the crowdfunding industry. The popular crowdfunding sites today charge a listing fee to projects which want to use their platform, and thereafter have no legal obligation to ensure whether these projects have lived up to their promises. Projects which fail to deliver their goals lead to disgruntled investors, and less than 1 in 3 people end up funding more than one project. This hurts the entire crowdfunding ecosystem.

Pledgecamp is introducing blockchain technology in the crowdfunding industry and implementing pro-backer measures. Through the Campaign Deposit mechanism, we will incentivize projects to get back their listing fees by showing tangible proof of progress to our users.

We would also keep a portion of the project’s funds locked in escrow through our Backer Insurance policy, to be distributed back to investors if they feel that the project hasn’t made sufficient progress. Recently, we have also joined the Vatican’s Laudato Si’ program, to support projects which are looking to make a positive social and environmental impact through their efforts.

For more information about Pledgecamp, please check out our website and read our whitepaper.