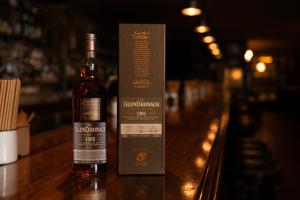 Sydney, Australia – The Whisky List is excited to announce the launch of The GlenDronach 1993 Single Cask Bottling Cask #392, a luxurious and rare Australian-exclusive Single Malt Scotch Whisky, aged 26 years in a first-fill ex-Oloroso Sherry cask, hand-selected by GlenDronach Master Blender, Dr. Rachel Barrie and consisting of only 659 bottles at 51.0% ABV.

Each year, The GlenDronach Master Blender, Dr. Rachel Barrie specially selects a handful of individual casks from the warehouses at The GlenDronach Distillery, to be released as a GlenDronach Cask Bottling. Each of these extremely limited releases is bottled from a single cask which displays only the most remarkable characteristics, the single malt whisky contained within having developed exceptionally during their long maturation process.

From this exclusive group of casks, The GlenDronach 1993 Cask #392 was singled out by Dr. Barrie as an outstanding, exceptional cask, and amazingly, one of the final casks to be released from one of the greatest eras of the distillery, the early months of 1993. It displays exceptional qualities sought after by whisky drinkers and collectors alike, perfectly balancing the characteristics of the distillery with the flavours imparted by the cask.

With the help of the amazing team at The GlenDronach distillery, this Cask #392 is being released entirely for Australia by The Whisky List. It was distilled on the 12th of Feb 1993, has been aged for over 26 years in a first-fill Oloroso Sherry Cask, was bottled in May of 2019 at 51.0% ABV and consists of only 659 bottles.

Dr Barrie’s tasting notes include an appearance of Hazelnut in colour, a nose of strawberry preserve, burnt orange zest, sandalwood and honeycomb and a palate consisting of red liquorice orange zest, Oloroso, pepped apple and bramble. The finish is long, warming, and lingering. The mouth is left to cope with wave after wave of warming richness with layers of sweetness and spice to this whisky. Give this whisky time to open up and you will see it transform while you taste.

Chris Ross, Co-founder at The Whisky List explained “being a small market and far away from the US and the UK, Australia often is left to last – or just completely left out – of selecting any single cask bottlings from distilleries, forcing whisky drinkers and collectors in Australia to purchase these kinds of releases from overseas websites and auction houses. This is why we’ve partnered with Brown-Forman in selecting this delicious cask from GlenDronach.”

In selecting this cask, Chris noted “We wanted to select a remarkable whisky, something just for Australia and something to help the rest of the world sit up and take notice of the whisky scene here. And not something other markets had passed up, but rather a release that would be sought after across Australia and even by whisky drinkers around the world. Our criteria was simple, it had to taste as good as we would expect a 26yo GlenDronach from early 1993 – one of the truly great vintages of the distillery – to be; rich and flavourful, but mature, refined and balanced. And of course it needed to have a fantastic, long finish. It had to truly demonstrate the character of this amazing distillery. And with the help of our friends at GlenDronach, we’ve scored for Australia a cask that is everything we wanted it to be.”

The story of cask #392 is just as unique as its contents. We worked closely with the distillery team and The GlenDronach master blender Dr Rachel Barrie to source the best casks for selection from this infamous 1993 vintage.

Chris also notes “Whilst we’re aware of numerous other luxury casks coming to Australia, to the best of our knowledge, this is the most valuable Scotch whisky cask ever imported into Australia, being worth close to $500,000. It's a significant investment for the Australian market, even for a whisky of this calibre and we hope Aussie whisky drinkers will savour every last drop.”

A bottle of this extremely rare Glendronach single cask whisky would be the perfect gift for Father’s Day, a whisky aficionado to indulge in or for a whisky collector to keep.

The Glendronach 1993 Cask #392 aged 26 Years is priced at RRP $700 AUD. This release is distributed by The Whisky List and available for retail at thewhiskylist.com.au. It will be available at $650 AUD to members of The Whisky List for a special pre-sale event starting 30th July – make sure you sign up to TWL newsletter on their website https://twl.shortcm.li/glendronach

To try this whisky before you buy, The Whisky List in partnership with The GlenDronach will host a number of exclusive tastings featuring #392 single cask in whisky bars across Australia. Venues include, Archie Rose Distilling Co. (NSW) (21st August), Hains & Co (SA) (29th August), The Elysian (7th August) and Whisky + Alement (VIC) and Halford Bar (WA). Tickets for these events will be announced via The Whisky List website, newsletter and social media. A limited supply of bottles will also be available to purchase at the upcoming Sydney Whisky Fair 2019.