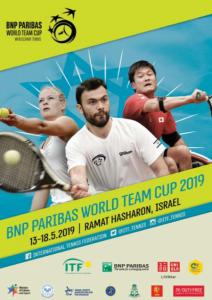 Through the skills learned on and off the court, and by being part of globally recognized tournaments such as this, we show our children, particularly those with special needs, what is possible.”
— Jacqueline Glodstein, Executive Vice President of Global Development

NEW YORK, NY, UNITED STATES, May 10, 2019 /EINPresswire.com/ — The 2019 BNP Paribas World Team Wheelchair Tennis Championships, a global event, is being held in Israel for the very first time in its 35-year history. It is taking place at Israel Tennis Centers National Center from May 13th -18th in Ramat Hasharon and will include 44 teams from 23 nations.

The Larry and Mary Greenspon Israel Tennis Center-Ramat Hasharon is the original home of the now 14 Israel Tennis Centers that dot the country from north to south. The Ramat Hasharon center continues to cultivate excellence through its unique tennis and education programs, nurturing generations of Israeli champions and first-rate tennis players.
Canada Stadium, where much of the action will take place, was inaugurated at the center in 1979 and has served Israel’s national Davis and Fed Cup Teams ever since, as well as hosting international ATP Tournaments such as the Riklis and Joyce Eisenberg Israel Open Tournaments. Offering state of the art facilities, the ITC’s flagship center is the crown jewel of the organization, serving as a place of pilgrimage for talented young athletes dreaming of becoming tennis stars.

As the home of the ITC’s High-Performance program, the courts at Ramat Hasharon have produced some of the greatest athletes in Israeli sports history. Names such as Amos Mansdorf, Anna Shmashnova, Dudi Sela Harel Levy, Shahar Pe’er, Andy Ram and Jonathan Erlich are just a few of the men and women who have passed through the center’s doors on the road to stardom.

The tournament will include competition for Men’s, Women’s, Quad and Junior titles.

Opening Ceremonies and tournament draw will take place on Sunday, May 12th. Title play will begin on Monday, May 13th, kicking-off three days of round-robin pool competition. Teams will then go on to compete in the semi-finals and knockout draws beginning Thursday, May 16th, with the Quad and Junior finals scheduled for Friday, May 17th and the Men’s and Women’s finals scheduled for Saturday, May 18th.

Israel Tennis Centers Foundation is one of the largest social service agencies for children in Israel, serving over 20,000 children every year. The focus of the organization is to empower children through sport and education to foster lasting peace in one of the most turbulent areas in the world. The focus of the ITC is on empowering children everyday so they can become better human beings. Through its social impact and coexistence programs, a wide range of children are served, including youth at risk, immigrants, along with children with special needs, from Autism and ADHD to Down Syndrome as well as those with developmental and physical disabilities.

"Through the skills learned on and off the court, and by being part of globally recognized tournaments such as this, we show our children, particularly those with special needs, what is possible. As well as how important it is to embrace an environment of inclusiveness, unity, respect, diversity and caring," states Jacqueline Glodstein, Executive Vice President of Global Development. "As we believe, this will set them on the path to building lasting peace within their communities and provide them an opportunity to lead by example."

The 2019 BNP Paribas World Team Cup will be live streamed internationally, including from the ITF Wheelchair Tennis website, with additional focus and content to be shown in the domestic markets for participating nations.